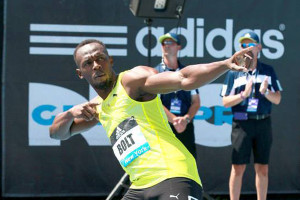 His Majesty is about to come back.

The 100m and 200m World record-holder has recently announced his presence at Sainsbury’s Anniversary Games, the next 24th of July, in the stadium where the 2012 Olympic Games took place.

It is going to be an intense Friday evening in London, when Usain Bolt will resume racing after a series of competitions he had given up to, because of his not perfect condition at the moment.

It was the Jamaican star who won the 100m at Sainsbury’s Anniversary Games in 2013, running in 9”85; it will be very hard for the eight times World champion to run those times again but nevertheless, Bolt claims to be happy to compete in this occasion. “London is a special place in which I love competing and I can’t wait to join the fray” – the “bolt” stated – “I have great memories of the competitions in the Olympic Stadium during Summer 2012 and in the previous London Grand Prix”.

The World record holder, who says to always have appreciated the public of London, will then test his condition and he will show what he is capable of in this part of the season, so satisfying the curiosity of many fans who are eager to see him on the track.

At Queen Elizabeth Olympic Park the races will go on for the whole weekend (from Friday 24th to Sunday 26th) and about fifteen World and Olympic champions will battle; among them, Mo Farah, Greg Rutherford, Jessica Ennis-Hill and David Rudisha, all of them Gold medal winners in the Olympic Stadium of London, in 2012.

The competition will also be a chance for the athletes to test their condition with a view to Bejing’s World Championships which will take place four weeks later, and all the eyes will be on Usain Bolt for sure.

His Majesty is about to come back and we will see what he is capable of.