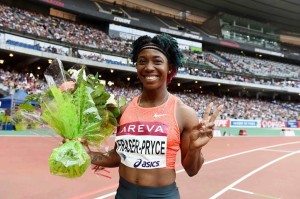 It was a miracle night both for winners and losers in the French capital at the Meeting Areva 2015.

As always, Diamond League offers impalpable emotions, as the speed expressed in only 100 meters, where both men and women were filled up with applauses.

Asafa Powell roared in his performance, covering all the track with his composed pace and towing all the chasers. The scoreboard marked 9”81 for the Jamaican veteran, but all the eyes were on Jimmy Vicaut who equalled Francis Obikwelu’s European record with a time of 9”86 (VIDEO).

Among the women, the contest was rather open because of the partecipation of both Shally Ann Fraser Price and the young sprinter English Gardner, both of them seasonal record holders with 10”79. The start immediately put Price in a good light; the sprinter rushed onto the track, cutting more and more ground way from the opponents. The stopwatch displayed a mighty 10”74 for Price (MR, WL), 10”80 for Blessing Okagbare and 10”79 for Gardner.

He would have liked to be a prophet in his own country, but unfortunately it was not the case: Renaud Lavillenie fails incredibly in his beloved Paris. Le Roi managed to achieve only a bitter-tasted fifth place, while Konstantinos Filippidis took the glory with a great jump, 5,91, worth the new Greek record.

Another king of the air got his wings broken: Mutaz Barshim.

The Parisian crossbar seems to be cursed for the top players: Barshim only manages 2,29 and a fifth place as well, while the challenge is won by Daniil Tsyplakov with 2,32. The Italian competitor Marco Fassinotti reaches eight place with 2,24.

The 3000m steeplechase men challenge was extremely tight, with everything happening in the end: the American Evan Jager was ready to take the glory but he fell head over heels on the last hurdle, leaving room to Jairus Birech who achieved one more victory in the Diamond League with 7’58”83. Despite the fall, Jager scores 8’0”45, USA record.

Everything is decided in the last lap for the 5000m women as well, between Genzebe Dibaba and Alzam Ayana. After the bell, Dibaba starts her rush and pushes the last 400m in 61 seconds, leaving no chance to Ayana. Final time: 14’15”41.Si

After a dark period, Zuzana Hejnova goes back shining, winning the 400Hs in 53”76.

Kirani James was beaten as well on the 400m, surrendering to Wayde Van Niekerk, who went below 44 seconds with 43”96. The young South African is the first non-American or Caribbean to run faster than 44 seconds, becoming the eleventh person able to do it.

Few emotions in the extension jumps, where the odds are respected, thanks to Micheal Hartfield (8,19 in the long jump) and Caterine Ibarguen (14,87 in the Triple).

It was a marvellous jump the one from Nikoleta Kiriakopoulou in the women pole vault, at a crossboard height of 4.83 (WL), leaving no match for the others.

Nothing to do for the returning Valerie Adams, whose undefeated streak comes to an end, in a race dominated by the Teutonic Christina Schwanitz in 20,31; on the other hand, Barbora Spotakova makes an impressive comeback in the javelin, setting the SB to 64,42.