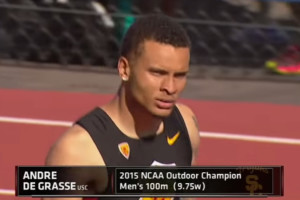 Yet another success for the canadian sprinter Andre De Grasse at the Canadian Championships in Edmonton that confirms  his outstanding condition after the NCAA race where he ran the 100mt in 9”75 and the 200 m in 19”58 with wind in favor.

Andre De Grasse proved himself to be a precious resource for the canadian team, where the stakes of a successful solo performance are still low but, with the team, could play a winning role in the Relay race, fertile ground in the past for the canadians