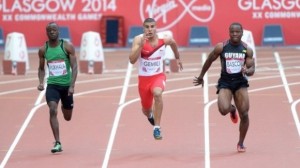 The list of “in doubt” athletes for the Beijing World Championship is becoming longer and longer.

After the news about his majesty Usain Bolt, it seems the young and talented british athlete Adam Gemili too could not make the worlds.

Unfortunately, in Birmingham he fell right after crossing the 100m finish line in 9″97, injuring his right leg.

In BBC Sport interviews, Gemili says he is slowly recovering and he doesn’t know if he will take the plane to Beijing, giving importance to being in shape for Rio 2016 Olympics.

If neither Bolt nor Gemili could not run, 2015 World Championhips will for sure lose a lot on entertainment.