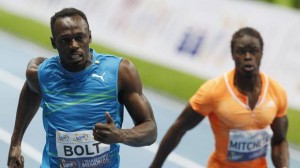 After his last appearance, a small pain in the left leg has influenced following trainings.
He will spend next two days in Monato to receive a medical treatmen in order to come back to his workouts.

“I’m really disappointed to not being able to compete in Paris and Lausanne”, said Usain Bolt. “I like to run these competitions, but at the moment I could not compete at 100%”.

Will Usain succeed in defending his double world champion title won in Moscow 2013?