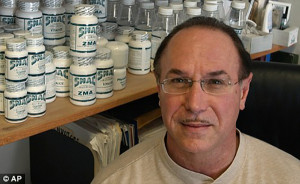 Yesterday appeared on Twitter a very short but important message from Victor Conte to WADA, a message that can lead to important developments:

ATTENTION WADA: My take is that elite Olympic athletes use powerful IGF-1 LR3. Per a WADA lab director these athletes are now “untouchable”

IGF-1 LR3 is a long lasting version of IGF-1 peptide. This substance has the capability of stimulate the muscles’ cellular growth helping to generate new fibers; moreover increases the absorption speed of most integrators, avoiding the muscolar loss and forcing nutrients in it, including aminoacids.

According to Conte, this peptide is invisible in usual WADA protocols, and whoever is using it will not be discovered and punished.

We don’t know if WADA will consider Conte’s suggestion, mostly because of his past life in sport and medical field.

Maybe not everyone can remember the BALCO scandal, the laboratory where the american sport has been doped during early 2000s, laboratory leaded by Conte. Among his assisted athletes there were Marion Jones, Tim Montgomery and Alberto Salazar, at the moment under doping investigation,  to who Conte prescribed only mineral reintegration.