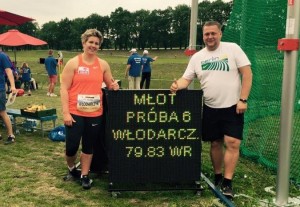 Not a single woman has been able to overcome the 80m line in the hammer throw.

The performance, obtained throwing the hammer from a side to the opposite of the Oder river, may not be officially recognized because rules are clear: “all the WR must be obtained in an athletics stadium with the IAAF label”.

The unusual competition, instead, has been organized outside a stadium and so chances of validation are really low.

At the moment the official World Rcord remains 79,58m obtained in Berlin’s Olympiastadium in August 2014.