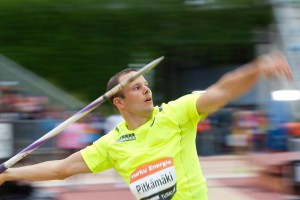 The competition started immediately on top level: after the first round of throws six athletes had already reached the 80m mark, firsty by Pitkamaki with 85,08m. But in the third attempt the egyptian Ihab Abdelrahman overcame the finnish with a throw ending up at 85,50m (SB).

As in a fairy tale, the home hero took the lead just with the last attempt: the electronic table says “89,09m“, season best for the World Champion of Osaka 2007 (improved the 88,62m obtained in Doha) and second best performance of the year, just behing Julius Yego with 91,39m setted in Birmingham on 7 June.

Second, Abdelrahman with 85,50m, followed by another finnish and his SB: Teemu Wirkkala (84,39m).

Last but not least in the hammer throw Pawel Fajdek with 80,71m and Denia Caballero with 65,17m in discus throw.