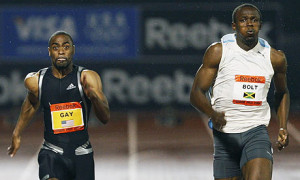 Usain Bolt is the fastest man in the world, and this is a matter of fact, but no one has never discovered which is the secret sauce for his success.

Muscles and training are really important, athletes know that, but a research made by Professor Michael J. Richardson of Cincinnati University found a really important asset used by the jamaican sprinter: the capability to sync the run with the opponent’s one.

Have you ever noticed that when an applause starts in a theater, after few seconds everyone is clapping at the same rythm? Or that a couple walking sync their steps after few meters? This is the principle.

Professor Richardson studied every single frame from Berlin 2009 World Championship’s final where Bolt achieved the world record, and he could confirm that 30% of Bolt’s steps where in sync with the second in the competition, Tyson Gay.

This is an astonishing discovery because, being Bolt higher than Gay, usually he keep a slower pace, but in that race the pace was 41 steps against Gay’s 46.

This perfect coordination was probably set thanks to visual and acoustic information gathered by Bolt in the surroundings.

Obviously we’ll need deeper analysis to validate the theory, but in the meantime is legit asking: if Gay would not have been in that final, we would have seen a world record anyway? And what if Gay’s pace was faster?