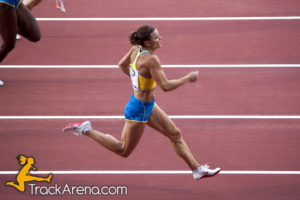 Every year Sweden and Finland national teams have an athletics battle linked to the competition among the two countries in the real life. This could be the explanation for such a big success. The Finnkampen (in Swedish) / Ruotsiottelu (in Finnish) manages to fill an entire stadium with athletics passionates.

Usually held in Stockholm and in Helsinki alternatively year after year, this time the event is hosted in Tampere due to works ongoing in the Helsinki stadium. Tribunes are still plenty though.

This is a team competition. Each country place their top three athletes in the event and the get points basing on the rank. 1st gets 7 points, 2nd 5 points, 3rd three points and so on till 1 point. Standings are made for Men and Women separately.

One of the most awaited athletes was for sure the Swedish track star Susanna Kallur, former European Champion on 100hs. She competed on the 100hs and 100m winning both the races with 12″95 and 11″53.

Hammer Throw is finnish matter. The soumi throwers occupied all the three podium positions taking 10 points of advantage on the Swedish team in a single event. The best throw came from David Söderberg with 74,12m.

Really high the level of the women Pole Vault, with 5 out of 6 athletes with a PB better or equal to 4,50m. But, probably due to the cold weather, none of them succeded in overcoming that measure. The best has been Angelica Bengtsson (SWE) who jumped 4,47m, same measure as Wilma Murto (FIN) but with less errors.

1500m W and 800m M had the honor to close the track schedule. Sweden showed a great team work in both races, literally creating a yellow wall in front of the finnish runners. In this way they managed to get the maximum of the points placing three athletes in the first three positions.