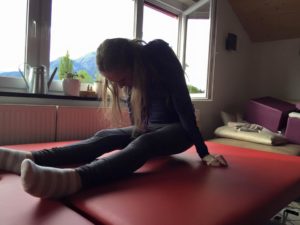 The story of Kira Grunberg, young Austrian athlete who got paralised after a bad fall during a training, is starting to get bettter.

After the surgery her conditions started to improve; she recovered partial use of the arms, now she can lift herself 5cm from the ground, and she is starting to do activities which the doctors had initially stated to be impossible to do again.

Interviewed by Gazzetta dello Sport tells how doctors visiting her notice considerable progress in her capabilities and the she states herself to be able to make base movements she was not able to do before like washing her teeth, type on the computer and write a signature.

She says to have re-watched the fatal jump, filmed by father who was training her: there was no wind and they were inside, no technical error. “It was the destiny”  Kira said.

She keeps following athletics and pole vault stayed as her favourite specialty; this year we will see her at the European Championships in Amsterdam to award the winner of the Men Pole vault, a competition in which she hopes to see Renaud Lavillenie on the top of the podium. The athlete, in fact, went to visit her after the accident and they are still in contact.

She wrote a book, “My jump into a new life” that will be published in September and it deals with her life; even though her life changed, Kira will be able to do most of the things she was doing before, as driving, thanks to the technology. She does not think her life became awful, but that is just different than before.